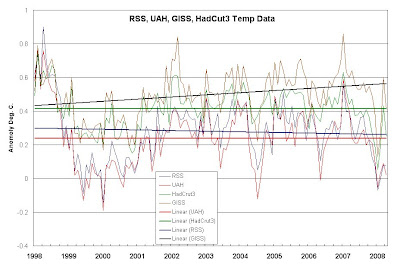 Posted by Tilo Reber at 6:30 PM No comments:

The issue that this post attempts to solve revolves around the claim by AGW proponents that the only reason that the temperature trend for the last 10 years is flat, is because the period begins with an El Nino and ends with a La Nina.

Using HadCrut 3 monthly data, I decided to try to isolate the ENSO events of the period under discussion in order to quantify the effect of each event on the slope of the complete chart. Since the complete chart yielded a trend line that was almost dead flat, I decided to use the value y of that trendline as the baseline against which to check the effects of the individual ENSO events.

Beginning with the first La Nina event of 98, I noticed that the La Nina yeilded 4 month of very high residual temperatures, even after the La Nina had ended according to NOAA tables. So I decided to include the four months on the chart, and to also include four months for all the other ENSO events as residual effects time periods. In general, this approach seemed to be very close to capturing the temperature result of each ENSO event.

Since there were only two month between the 98 El Nino and the 98 La Nina, using the four months residual left me with two month that were being used by both the first La Nina and the first El Nino. Since the temperatures for those months were very high, I decided to leave them with the El Nino period and remove them from the La Nina period.

Details of these periods may be seen in this NOAA chart: 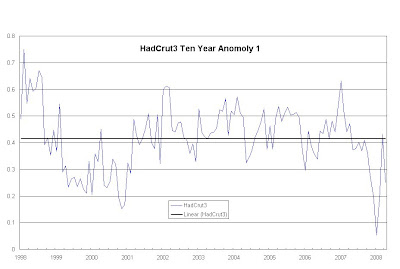 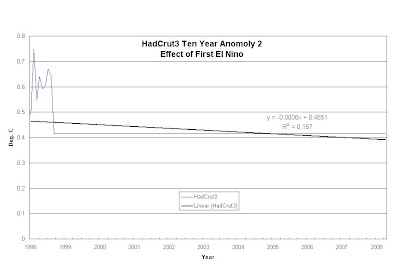 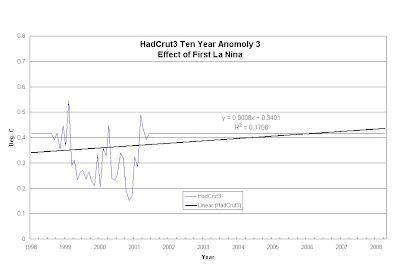 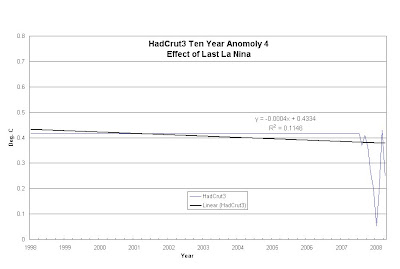 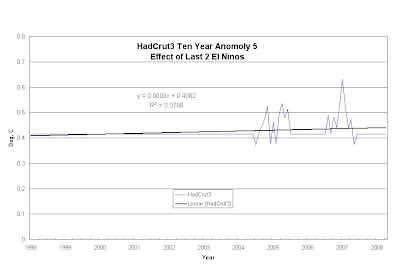 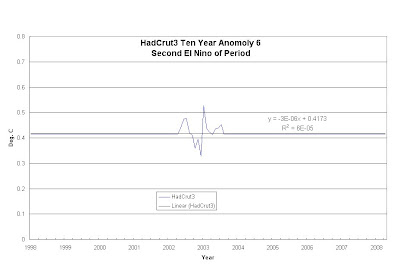 The temperature anomoly effects of the ENSO components are:

In summation, all of the ENSO effects for the charted period would actually help the slope of the ten year trend be positive. Depending upon the months that are used, the number could be changed slightly. But in summation, ENSO had nothing to do with the flat temperature trend that we have experienced over the past ten years. The period is not cherry picked for an effect. The .2C per decade rising temperature trend that we should see according to the AGW proponents is not there, and it's abscence remains completely unexplained. The assertion by AGW proponents that the trend was made flat by choosing a period with an El Nino at the beginning and a La Nina at the end is simply untrue. 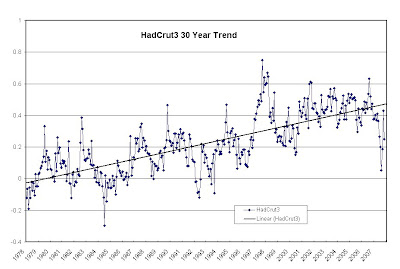 Posted by Tilo Reber at 3:01 PM No comments: 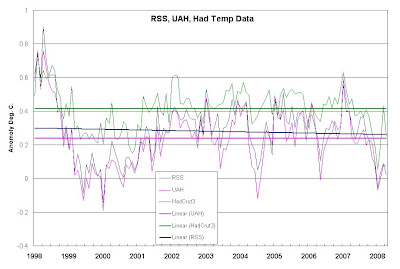 Posted by Tilo Reber at 7:45 PM No comments: