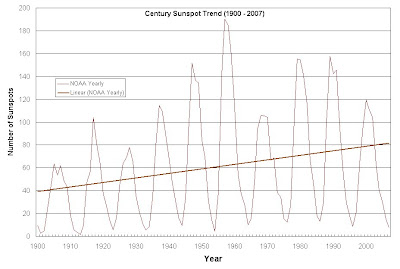 Looking at the AGW issue from a local POV like from Wichita, KS there is good evidence for solar cycle effects, and not much, if any, evidence for a linear CO2 effect.

Carbon emissions have no discernable effect on climate, but our gullibility nets promoters of this “crisis” billions per year. Meanwhile they change nothing of their own lifestyles, though they also live on the planet they claim we are destroying. Claiming to want to save us from our folly, they seek to strip away our freedoms while destroying our economy. While the climate itself mocks their so-called linkages, and our economy is already on the edge of collapse, a Democratic Congress is still pushing for carbon cap legislation. What will it take to bring this farce to an end?

Your website leads me to believe we share the concerns about this attempt to sell out our country for profit and power. Would you help me promote a book I have written examining this hoax? It is intended to make readers angry over being played for patsies. If enough people read it, it would create a public backlash against that legislation, but through my own efforts, I have been unable to sufficiently publicize this work. Would you also pass this e-mail on to all your peers you think might agree and help?

The book is entitled “A Climate Crisis a la Gore” and is organized as follows:

• Introduction – the motivation behind the assembly of this information for public use.
• Part 1 – Excerpted ideas from Mr. Gore’s book, The Assault on Reason. I use Mr. Gore’s own claims regarding the proper and reasonable way to enter an argument or evidence into the marketplace of ideas, the forum of reason, the real power behind democracy.
• Part 2 – A claim by claim analysis of Mr. Gore’s documentary, An Inconvenient Truth. These are evaluated with simple logic, claims elsewhere in the documentary, Mr. Gore’s excerpted written principles of reasoning, and scientific research and findings regarding the subjects of his claims.
• Part 3 – Discussion and disclosure of players and special interest groups creating the perception of a global climate crisis. The history of the movement is examined, motives behind involvement, dollar amounts of profit already being reaped by promoters, and what they stand to gain if America enacts carbon legislation.
• Conclusion – The coming economic storm resulting from enacting this legislation and a plea to readers to contact legislators demanding such laws be reconsidered.

Excerpts can be reviewed and the book ordered at Amazon.com by entering the title, ISBN# (978-1-4196-8684-9) or by following the link http://www.amazon.com/Climate-Crisis-Gore-perception-warming/dp/1419686844/ref=sr_1_1?ie=UTF8&s=books&qid=1202424474&sr=8-1 If you are willing to inform your readers of its contents and availability, an informed (and angry) population of voters might be a real, and maybe the only, check and balance system capable of stopping Congress.