In connection with James Hansen's explanation of why his GISS temperature record diverges from that of HadCRUT, I decided to check on the legitimacy of what GISS was doing. Dr. Hansen's article is here at RealClimate. This is the specific chart of interest: 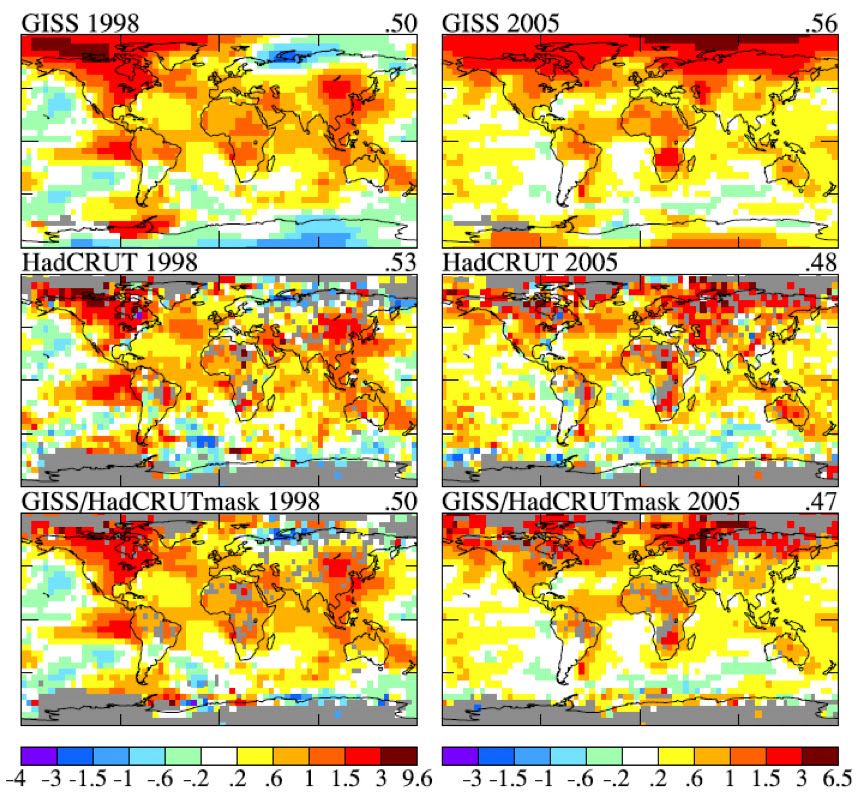 In this chart, Dr. Hansen explains how the GISS record is different from HadCRUT.   The essential difference is that there are areas at the poles where GISS has filled in the values by extrapolating from the nearest land based records.   Dr. Hansen created a mask of all the areas that HadCRUT does not cover.  He then applies this mask to the GISS record and deletes the readings for the areas that are masked off.  The resulting chart is marked GISS/HadCRUT mask above.   Dr. Hansen then goes on to provide a graph which shows that the GISS divergence with HadCRUT no longer exists after the missing HadCRUT boxes have been removed from the GISS record.

So far so good.  I think that it is safe to say that the divergence of the GISS record is due to the interpolation and extrapolations at the poles.  Now we need to ask the next question - are the GISS interpolations/extrapolations legitimate.  GISS has 2005 as the hottest year for his surface temperature record.  HadCRUT and the satellite records (UAH, RSS) have 1998 as the hottest year.  So Dr. Hansen compares 1998 to 2005 in his chart, allowing the reader to see why the difference exists.  Of course Dr. Hansen considers that his method produces the more accurate result.

One of the first things that pops out about the charts is how different the top row of polar cells is between the two records.  For example, if one looks at the top row of the HadCRUT 2005 chart, one sees a group of cells directly above Svalbard that are shown as having a cool anomaly in that record.  Then, when one looks up at the same cells in the GISS record, one sees that GISS has the same cells colored to the maximum hot anomaly.  In fact, the cells that HadCRUT has in the top row (polar area) of that record look very different from the top row of the GISS record.  The fact that these cells are so different and that they are accounted for in both records makes me wonder what is going on.  Looking at the GISS site, they say this.


So if there is sea ice coverage for any part of the year, GISS will not use SST values to cover those cells for the entire year.  Those cells must be covered by extrapolations from land for that year.  This means that when the area is cover with ice or with water or with part ice part water, it will have it's anomaly extrapolated from land, regardless.  HadCRUT, on the other hand, does not extrapolate their coverage.  But they will use SST values for a cell when SST values are available for part of the year.  If the area is covered with ice for the entire year, HadCRUT will not assign it a value.  Therefore we get polar areas that are covered by extrapolation by GISS and not covered at all by HadCRUT.

When we look at the HadSST2 record, we see that the cool cells that show up above Svalbard in 2005 are consistent with the numbers in that record.   And these then go  into creating the sea surface portion of the HadCRUT3 temperature record.  So, obviously, how cells are filled with data can have a profound effect on the anomaly value that those cells have.  This leads one to wonder if extrapolations at the pole are legitimate.  I decided to look at some of the northern Russian stations, at the GISS site, that show up as being so hot in the 2005 version of the GISS chart when compared with the 1998 version of the chart.  I found that those big changes are in fact represented in the individual records - especially for the coastal stations.  Here are three of them.

For comparison, let's look across the Arctic ocean and see what was happening in Canada and Alaska at the same time.

So it seems that the North American side of the Arctic changed little, or even got cooler between 98 and 05, the Russian side warmed considerably.  Why is that?  I think that this ice cover map gives us the answer.  As is immediately apparent, the coastal ice cleared out far earlier in 2005 in northern Russia than it did in 1998.  This is even though the rest of the globe was slightly warmer in 1998 than in 2005.  When dealing with coastal stations, removing the ice and exposing the water is like taking the hatch off a heating source for the coastal thermometers.  For stations that are in areas where the temperature is well below zero, exposing the immediate area of that thermometer to a surface that is above zero, changes everything.  Looking at Ostrov Vize, we see that it is a small island, and therefore even more subject to changes in coastal sea ice.  And when we compare 1998 months on this island with 2005 months we can see that there are differences in some of the monthly means that are larger than 10C.  Even a partial ice cover as opposed to a complete ice cover will supply the stations with more heat.

So I think that we can safely say that the huge change in the anomalies of Russian coastal stations is mostly due to coastal sea ice changes.  In fact, if we look at stations further inland in Russia, the coastal effect begins to decline.  With this in mind, we need to ask if the GISS extrapolations of land based stations, particularly coastal stations,  to the poles is appropriate.

The answer would seem to be that it is not, and the Svalbard case makes this perfectly clear.  There we had a case where the SST anomaly was actually cool, and yet the land based extrapolation actually turned those sea based cells more than 3C hotter.  Reaching across the Arctic Ocean with temperatures that are the result of a coastal sea ice effect cannot give valid answers for what the temperature anomalies away from those coastal stations should be.  In fact, taking the variation that is represented by those coastal stations and extrapolating into the interior of Russia is also not appropriate, because the interior areas did not undergo the magnitude of temperature change of the coastal stations.

Looking at the SST temperature  anomalies that NOAA uses for 1998 and 2005 it again looks like nothing exceptional was happening in the Arctic (Note, the chart will not retain the months that I selected; so use your own sample moths and they will plot).  It seems, from this analysis, that GISS polar extrapolations and interpolations are likely to simulate large variations away from the Arctic coasts that are really only present as changes at the Arctic coasts.  And the GISS divergence from HadCRUT, as well as from UAH and RSS are likely to be errors instead of enhancements.
Posted by Tilo Reber at 6:47 PM

Not related directly to the content here, but have you seen this and commented? How come we don't see more curiosity about this? Does it have any validity?

WATERLOO, Ont. (Monday, Dec. 21, 2009) - Cosmic rays and chlorofluorocarbons (CFCs), both already implicated in depleting the Earth's ozone layer, are also responsible for changes in the global climate, a University of Waterloo scientist reports in a new peer-reviewed paper.

In his paper, Qing-Bin Lu, a professor of physics and astronomy, shows how CFCs - compounds once widely used as refrigerants - and cosmic rays - energy particles originating in outer space - are mostly to blame for climate change, rather than carbon dioxide (CO2) emissions. His paper, derived from observations of satellite, ground-based and balloon measurements as well as an innovative use of an established mechanism, was published online in the prestigious journal Physics Reports.

Pauline, WUWT ran a story about this a couple of month ago. I think that the cosmic ray effect on clouds is going to become a very important part of the total puzzle. But for now, it is a hotly debated issue. When Svensmark runs his cosmic ray experiments at CERN this year, we should know a lot more.